A second round of community consultation

In early April this year, Transport for NSW released their Strategic Corridor Workshops Report which summarises the outcomes of several workshops to arrive at 3 short-listed bypass corridors – Purple, Orange and Yellow. 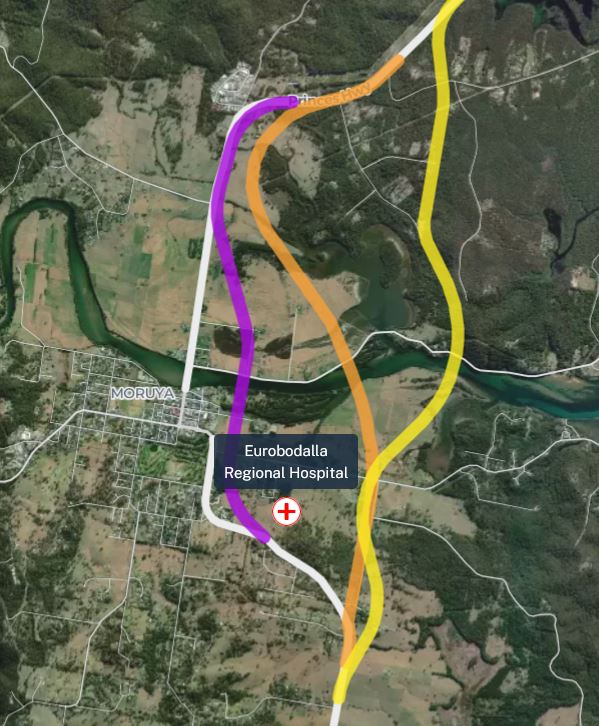 This is a new development. In May last year, Transport for NSW put forward only one preferred corridor – the Orange Corridor - as part of their Moruya Bypass Strategic Corridor Options Report. However, they received lots of criticism from the community about:


They sought feedback on the 3 bypass corridor options as part of a second round of community consultation that started in April and ended on 13 June 2022.

The community consultation comprised online surveys, a corridor feedback form seeking comments on the 3-short-listed options and an interactive map that allowed people to comment directly on a map of these options. There were 3 community information sessions on Traffic and Noise, Landscape and Biodiversity and Flooding, as well as a Flood Focus group which met 3 times in May and June. In addition, Transport for NSW held stalls at the SAGE markets and Moruya Country markets as well as the Corrigan’s Beach market.

MBAG members responded to the online surveys and provided comments on the interactive map, as well as the corridor feedback form. We attended all of the community information sessions and were represented on the Flood Focus Group. We were also present at the markets and had our own stall the Moruya markets.

Our key concerns about this latest round of consultation was its reliance on online feedback which prevented a large portion of our community from having a say. There was no clear indication how each of the bypass options would integrate with the new Eurobodalla hospital and there was no acknowledgement of the huge impacts of the 2019-20 bushfires and Covid on the environment and the community, events which changed the landscape of our region.

The Moruya Bypass Action Group provided our members with the following dot points summarising the advantages and disadvantages of the 3 short-listed bypass options.

If you believe that Moruya does not need a bypass at this time, please let Transport for NSW know. Many people are telling us that there are other priorities for our area right now, including the new Regional Hospital and fixing known blackspots as well as the road surface on the Princes Highway south to the border.